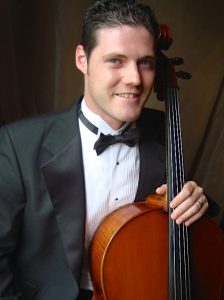 A native of Atlanta, GA, Daniel Holloway commenced his lifelong musical journey at the young age of five when he began studying the guitar with his father. In his youth, he was musically educated through means of demonstration and memorization, and did not learn to read music until his teenage years when he became involved in his middle school string orchestra program. After looking over the instruments offered in the string orchestra, the double bass drew his attention because of its similar tuning to the guitar. By age thirteen, he was achieving much success on both instruments. The final discovery of his “true musical voice” was not realized, however, until a year later when he heard world-renowned cellist, Yo-Yo Ma, performing the Bach cello suites on PBS. It was at this very moment that he became captivated by the instrument’s beautiful and expressive sound and decided to fully commit his efforts into mastering this eloquent instrument.